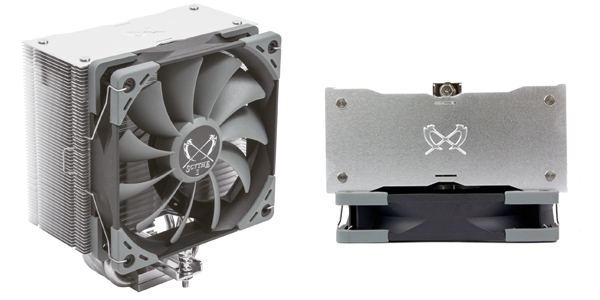 15.12.2017, Oststeinbek (Germany) – Japanese cooling expert Scythe presents the significantly improved “Mark II” version of its Kotetsu CPU Cooler. While keeping the basic design of the predecessor, Kotetsu Mark II comes with both visual and technical improvements. One of the key advances is the offset, where the heatsink is not centered but moved to the side and the rear. This allows the CPU Cooler to increase the distance to the first PCI-Express slot, offering unchallenged compatibility to VGA card with outsized cooling solutions and avoid clearance issues with memory modules with large heatsinks at the same time. Kotetsu Mark II is able to deliver a significant performance boost compared to the first version, thanks to an optimization of the manufacturing process. Visual improvements include the new aluminum-look top-cover and nickel-plated heatpipes and base-plate. The Kotetsu Mark II is bundled with a high-quality PWM-fan from Scythe’s Kaze Flex 120 PWM series. In spite of the significant improvements of performance and visuals, Kotetsu Mark II price is remaining to assure the best possible price-performance ratio. 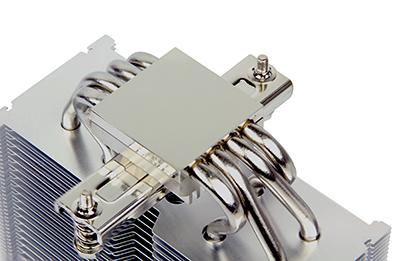 The Mark II features four nickel-plated copper heatpipes and solid copper-baseplate, assuring great performance and corrosion protection. The aluminum fin stack and the heatpipes endings are covered by a slick aluminum-design top-plate. Kotetsu Mark II is the first Scythe CPU Cooler that utilizes the new asymmetrical design, where the heatsink is offset to rear as well as 10 mm to the side. Scythe achieves unique compatibility advantages thanks to this design. The increased distance to the first PCI-Express slot and RAM modules assures exceptional compatibility to both large VGA cards as well as RAM modules. In addition to that, total height of only 154 millimeters and weight of 645 grams allows Kotetsu Mark II to easily fit in any mainstream PC case.

The supplied case fan has been upgraded to the latest model from the high-quality Kaze Flex 120 PWM case fan series. This fan incorporates Scythe’s self-contained liquid Sealed Precision FDB bearing, which reduces friction and wear significantly and offers average lifespan of 120.000 hours! Smooth and flexible fan speed control is achieved thanks to PWM fan control, which allows anything from ultra-silent operation at 300 RPM up to impressive performance at 1.200 RPM. This speed range offers steady airflow from 28,2 to 86,93 m³/h. Kaze Flex 120 PWM features rubber-insulators at the corners, which prevent the transfer of vibration, resulting in greater stability and lower noise levels. 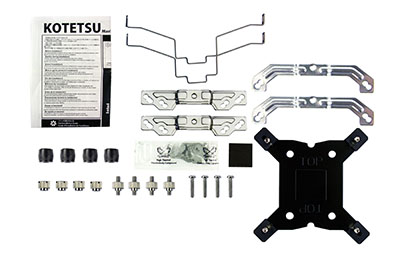 Scythe equips the Kotetsu Mark II with the third generation of the Hyper Precision Mounting System (H.P.M.S.). The H.P.M.S. III is the latest mounting mechanism, which is based on pre-assembled metal mounting bars with spring-loaded screws, in order to prevent uneven distribution of pressure. The compatibility list covers more than just the major sockets, including Intel® Sockets LGA775, LGA1150, LGA1151, LGA1155, LGA1156, LGA1366, LGA2011(V3) and LGA2066 as well as AMD® Sockets AM2(+), AM3(+), FM1, FM2(+) and AM4. The package contains all the required clips for mounting the Kotetsu Mark II, one fan clip set, user-manual as well as a package of thermal grease.

Scythe Kotetsu Mark II with the Model-No. SCKTT-2000 is available as of today with the MSRP of 29,50 € (VAT/Taxes not included).